The 10 most bizarre golf courses in the world

You’d be hard-pushed to call golf an extreme sport. It is a low-risk game played at a leisurely pace in mostly scenic, but ultimately ordinary, locales.

Emphasis on most, because in various pockets around the world – and in one instance, outside it – golf is taken to extremes.

Across these venues, the familiar rules of course design have been shredded; dress codes are exclusively nude, tee boxes require a helicopter journey to access, fairways sit on the rims of active volcanic craters, and water hazards are home to sharks and alligators.

“The ardent golfer would play Mount Everest if somebody put a flagstick on top,” celebrated golf course designer Pete Dye once said. The following courses are a love-letter to that ethos.

Generally, golfers like it to be quiet when they swing. At professional events, stewards will hold up signs to instruct nearby spectators to be silent.

Unsurprising then, that no Tour events are hosted at Kantarat Golf Course in Bangkok, where players must periodically tune out the deafening roar of passenger airplanes touching down and taking off either side of them.

Situated between the two runways at Don Mueang International – Asia’s oldest active airport – the 18-hole, par-72 course was was built by the Royal Thai Air Force in 1952. It was the first golf course established in the Thai capital, and the second ever built in the country after Hua Hin Royal Golf Course.

A weekday round for visitors costs 300 Baht, according to the course’s website, a very reasonable $8.62 for those willing to weather the overhead distractions. Air Force personnel can play at the discounted price of 100 Baht – around $2.87.

Described by Sports Illustrated in 1988 as “the most dangerous golf course in the world,” the course at Camp Bonifas – situated 200 yards south of the Demilitarized Zone (DMZ) that divides North and South Korea – is not a course at all: it is a single, 192-yard, par three hole.

US and South Korean service members stationed at the military post are welcomed to wind down with a venture down a fairway like no other – one bordered with barbed wire and military trenches, and ending with a green made of artificial turf.

At most golf courses, the signs to introduce each hole tend to just show the number and its yardage. Camp Bonifas’ sign follows the same formula, before adding a warning: “Danger! Do not retrieve balls from the rough. Live mine fields.”

A tongue-in-cheek joke? Not according to a 1998 Washington Post article, which said that at least one wayward ball had detonated a land mine.

For 18 holes of South Africa’s Legend Golf course, each designed by a different pro golfer, players enjoy a visually stunning experience. At most venues, it would then be time to retire to the clubhouse. Here though, a helicopter awaits to escort you to what the course claims is the world’s longest par-three hole.

“The Extreme 19th” tee box sits 4,500 feet above sea level on the lip of a sheer cliff face on Hanglip Mountain, some 400 meters (434 yards) above, and 361 meters (395 yards) away from, a green shaped like the African continent. With most drives airborne for over half a minute, cameras and tracking technology are used to spot balls.

It is a challenge that has attracted some of the world’s top golfers and biggest celebrities, with actor Morgan Freeman one of an elite group to record par on the hole, according to South Africa’s official tourism site.

Former Barbados cricketer Franklyn Stephenson made history as the first to make birdie, but spare a thought for musician Phil Collins, who could only manage a double-bogey.

Finding the water with your ball during your round could snatch defeat from the jaws of victory. At Carbrook Golf Club in Australia, jaws might just snatch your ball.

Long believed to be a local legend, rumors of bull sharks in the water hazards at the Queensland-based course were proven to be true in 2011 when general manager Scott Wagstaff uploaded YouTube footage of a finned local circling just off the greens. 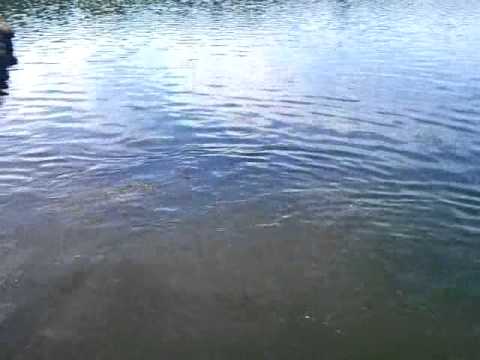 The arrival of the bull sharks – considered by many scientists to be the most aggressive shark species – is the result of heavy flooding during the mid-1990’s, Wagstaff told Golfing World in 2012. According to Wagstaff, the sharks entered the course’s lake after the nearby Logan River overflowed, and have remained there ever since.

Today, they have become a part of the course’s identity. The club’s logo features a shark, its youth program is coined the Junior Shark Academy, and the “Shark Lake Challenge” is staged as a monthly tournament.

Staging an annual golf tournament on the world’s deepest lake sounds like a recipe for lost balls, but organizers in Siberia have found an unlikely golfing ally: ice.

Every March, Lake Baikal stages the “Baikal Prize Open,” where contestants don coats and gloves to play golf on the water’s frozen surface. Balls are exclusively bright colors – red, orange, or yellow – to ensure they can be spotted amid the endless floor of snow and ice, and holes are made bigger.

In 2020, the lake hosted the World Ice Golf Championship, a tournament long held at Uummannaq in Greenland.

Granted, there is no official golf course on the moon, but as far as extreme golfing goes, Alan Shepard’s legendary exploits in February 1971 were out of this world.

Having snuck a modified club in his suit, the Apollo 14 astronaut hit arguably the most famous two shots in the history of the sport, and the only ones ever made on the lunar surface. He might have scuffed the first, and the second may only have traveled 40 yards – not the “miles and miles and miles” he initially claimed – but Shepard’s feats have long since resonated as one of the most iconic, human moments of NASA’s space missions.

Unaffected by wind or erosion, the balls remain frozen in time, unmoved for half a century. With the launch of Artemis I last month, humankind’s long-awaited return to the lunar surface edges closer, but the universe’s most exclusive golf club looks set to stay restricted for a while yet.

“Maybe one day we’ll have colonies on the moon and it’s like Stonehenge – we don’t want to be messing around in the Apollo landing sites,” NASA’s chief historian Brian Odom told CNN.

“I think they (the balls) are where they need to stay and we need to make sure they’re preserved as they were.”

“Kīlauea ranks among the world’s most active volcanoes and may even top the list,” reads a US Geological Survey report. Sounds like a good site for a golf course.

Situated close to the crater rim of the island of Hawaii’s southeastern-most volcano, Volcano Golf Course brings a new meaning to “playing with fire.” Set 4,000 feet above sea level, the course offers golfers breathtaking views of Mauna Loa – the world’s largest active volcano – to the west and Mauna Kea to the north.

That proximity provided players with a front-row seat to the eruption of both Kilauea and Mauna Loa earlier this month. The eruption of Kilauea in 2018 caused devastating damage to hundreds of surrounding homes, but lava from an ongoing eruption that began in 2021 has been confined to the summit crater.

As if taking on one of golf’s most notoriously difficult courses wasn’t daunting enough, players at Kiawah Island’s Ocean Course must share the fairways with a crowd of sharp-toothed residents.

Host of the 1991 Ryder Cup and 2012 PGA Championship, the course welcomes an array of wildlife – including turtles, dolphins, and bobcats – but alligators typically steal the show. Be it swimming in the water hazards or basking in the South Carolina sunshine, the reptiles are naturally shy of people and require little management, resort official Bryan Hunter told CNN.

“Really, there’s not much to manage as long as people respect the alligators and don’t feed or harass them,” Hunter said, adding that anyone caught aggravating them is hit with a $2,000 fine.

“Feeding them is equally bad as they soon learn to associate people with food, which is not a good combination, obviously. So, really the key is to observe and appreciate them from a distance.

“They’re truly remarkable creatures, and play a vital role in the ecology of the island.”

One hole down, just 17 more and 863 miles to go. At Nullarbor Links in Australia, the world’s longest golf course brings a new whole meaning to “the long game.”

Starting at Ceduna in the country’s west, players stop off at holes spread across nearby towns and roadhouses along the Eyre Highway before finishing up their round – often days later – in the western city of Kalgoorlie.

Taking on the challenge has become a bucket list item for golfers around the world. Each year the Nullarbor Links stages its “Chasing the Sun” tournament, traversing the entirety of the course.

A course in France has adopted a unique approach to the notorious problem of golf’s dress code: no dress at all.

Situated near Bordeaux in the country’s southwest, the La Jenny naturist holiday resort lays claim to the world’s only naturist golf course. Weather permitting, nudity is compulsory at the six-hole course.

As well as hosting tournaments and Pro-Am competitions, the course also offers visitors a driving range and golfing lessons, taught by a member of the PGA France, according to the resort’s website.

Jordan Spieth on the joy of trash-talking Tiger...

Read the Latest News On Business, Politics, Sports, Entertainment & Much More From Uae And Around The World At Gulf Times.

We use cookies on our website to give you the most relevant experience by remembering your preferences and repeat visits. By clicking “Accept All”, you consent to the use of ALL the cookies. However, you may visit "Cookie Settings" to provide a controlled consent.
Cookie SettingsAccept All
Manage consent

This website uses cookies to improve your experience while you navigate through the website. Out of these, the cookies that are categorized as necessary are stored on your browser as they are essential for the working of basic functionalities of the website. We also use third-party cookies that help us analyze and understand how you use this website. These cookies will be stored in your browser only with your consent. You also have the option to opt-out of these cookies. But opting out of some of these cookies may affect your browsing experience.
Necessary Always Enabled
Necessary cookies are absolutely essential for the website to function properly. These cookies ensure basic functionalities and security features of the website, anonymously.
Functional
Functional cookies help to perform certain functionalities like sharing the content of the website on social media platforms, collect feedbacks, and other third-party features.
Performance
Performance cookies are used to understand and analyze the key performance indexes of the website which helps in delivering a better user experience for the visitors.
Analytics
Analytical cookies are used to understand how visitors interact with the website. These cookies help provide information on metrics the number of visitors, bounce rate, traffic source, etc.
Advertisement
Advertisement cookies are used to provide visitors with relevant ads and marketing campaigns. These cookies track visitors across websites and collect information to provide customized ads.
Others
Other uncategorized cookies are those that are being analyzed and have not been classified into a category as yet.
SAVE & ACCEPT